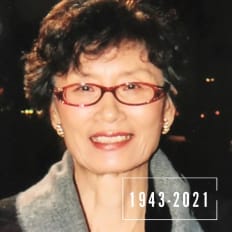 Our mother wished to be surrounded by her closest, dearest friends as her family lays her to rest. This service will be held outdoors, socially distanced. Limited seating under a tent will be available. Obituary is below. ~ Janet Alejandro and Julie Oh ~

Ryongja Oh, beloved wife, mother, grandmother, sister and aunt passed away peacefully in her sleep on April 1, 2021 after a brave battle with cancer.

She was born in Seoul, South Korea on March 4, 1943 to Youngpyo Hong and Yongsook Kim. After graduating from Seoul National University High School, she graduated from Ewha Womans University with a degree in English Language and Literature in 1966. She is survived by her husband, Minun Oh, whom she married on October 30, 1968. In 1975, she immigrated with her family to the United States and settled in Virginia Beach, VA where she was an active member of the Tidewater Korean Baptist Church. In 2001, she moved to Fairfax County where she became an active member of the Korean Central Presbyterian Church where she was a deaconess. Family and church were her greatest sources of joy and she freely gave all of herself to both.

An interment service will be held at Stonewall Memory Gardens in Manassas, Virginia at 10am on Monday, May 17.

In lieu of flowers, donations may be made to Capital Caring online or via mail to Capital Caring Health c/o Hospice Philanthropy, 3180 Fairview Park Drive, Suite 500, Falls Church, VA 22042, in memory of Ryongja Oh.